The staff at Ladyvet Animal Hospital strives to provide professional,
compassionate care and excellent customer service. We will answer your
questions and make sure you're comfortable leaving your beloved pets in our care. 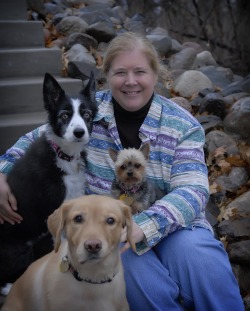 Dr. Vicki graduated from Michigan State University College of Veterinary Medicine in 1980, and moved to Ladysmith from her home in Detroit, MI at that time.  She worked for Dr. Julian Lang of Ladysmith Veterinary Clinic for 16 years, treating mostly dairy cows and large animals, with some pets seen each morning.  The opportunity came up to purchase what was then known as Goddard Animal Hospital in 1996, and so Dr. Vicki bought the practice, and started her full-time career in small animal medicine at that time, and changed the name of the clinic to Ladyvet Animal Hospital shortly thereafter.  Dr. Vicki has brought several new technologies to the hospital, including laser surgery, therapy laser, digital dental X-ray, an otoscope with a camera so clients (along with the doctor) can see what is going on in their pets ears, in-house laboratory for blood and urine analysis, converted record keeping to mostly paperless using computers, high-speed dental unit and ultrasonic scaler for dentistry, and plans to convert soon to digital X-rays from the old film unit now in use.  At home, she has a farm full of animals, including 100 beef cows and calves, several miniature donkeys, exotic pheasants, several barn cats, and lots of free-loading wildlife at any one time!  She shares her home with her husband, Terry, and 3 happy dogs named Kess, Ben, and Riley.  Dr. Vicki enjoys growing many orchids seen at the clinic, gardening, and photographing the wildlife that is so plentiful in the area, when she isn't working at the clinic. 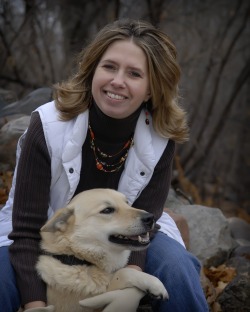 Tracy started out as a receptionist at Ladyvet Animal Hospital in February 2005, and continually accumulated more and more tasks until we redifined and promoted her position to our first office manager.  She is the person to ask for if you need to order something special, need to discuss fianancing, or if you have any concerns or questions.  Tracy lives west of Ladysmith with her family, and she likes to ride her horse, dabble in photography,  garden, volunteer her time for her religious activities, and to relax with friends and family when not working at the hospital.  She has a golden retriever cross named Peanut, who she adopted from the Chippewa County Human Society, and a 18 year old quarter horse mare named Prize.  Tracy spent her childhood helping her dad in his work on area livestock, and learned her longtime love of animals from him.  She really enjoys assisting Dr. Vicki when needed, especially in surgery, but also enjoys working one on one with clients at Ladyvet Animal Hospital. 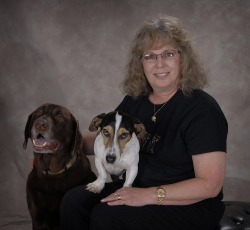 Judy has been working with pets professionally for 29 years in many capacities.  At Ladyvet Animal Hospital, she is our admitting client specialist and has been with us since May 2009.  She is also now our groomer starting May 2011.  She may be familiar to those clients from the Eau Claire area, as she worked at Eau Claire Animal Hospital for 20 years as a groomer and receptionist.  Judy and her husband reside in the Winter area, and live with 2 dogs, Deacon and Spuds, and one cat named Saturn.  Judy enjoys four wheeling, fishing, visiting with family, and is an avid and loyal Packer and Brewer fan when she is not busy at the hospital.  She will often be the "voice" on the phone when you call, and always has a smile ready when you stop into the clinic. We are very fortunate that Judy has joined our team here at Ladyvet Animal Hospital. 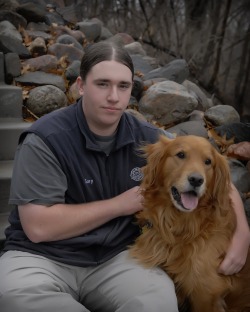 Gary and his family moved to Ladysmith from Albany, WI.  They chose this area as they owned land here and decided to live here full time.  He started at Ladyvet Animal Hospital in December 2007 as a kennel attendant, and now works full time as Dr. Vicki's assistant in both the exam room and the surgery suite.  He is home schooled and is slowly working towards high school graduation.  He likes spending time hunting, fishing, fixing his truck, and surfing the internet.  He owns Riley, his 10 year old golden retriever, but lives with his family and 3 other dogs, 3 cats, , 2 parrots, 6 parakeets, 5 rabbits and one turtle. 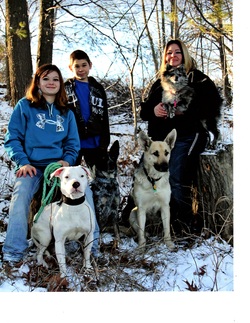 Lea joined our clinic family in September of 2011 as a full time Client Service Specialist.  Lea lives with her two children, Justine & Tyler on a farm in Tony.  She has a love of animals, and shares her home with: 6 horses, 4 dogs and 5 cats.  She loves participating in activities with her horses, including barrel racing, camping and trail riding.  Her favorite horse is Eclipse, a 8 year old spotted draft horse.  Lea also enjoys designing and putting graphics on cars. 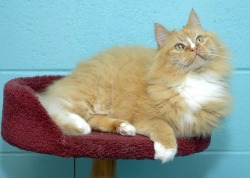 Oliver is the "black sheep" of the family.  He was named Oliver as we already had Dickens, and Charles Dickens wrote "Oliver Twist", so that is how he got his name.  Oliver came to us November of 1998, and was about 6 weeks old at the time.  A client found him crying along highway 27, and he had a damaged face, a broken leg, a broken tail, and he was covered in fleas.  She could not afford to care for him, so Dr. Vicki adopted him.  Dr. Vicki surgically fixed his face and leg, and his tail healed on its own.  He still has a "unique" smile!  Oliver was neutered when he was 6 months old, as he was spraying urine all over the clinic (some of you can sympathize with this).  Well, that didn't help at all.  He still kept spraying, and his urine was very strong, like an intact male cat.  So, Dr. Vicki did a second surgery 2 months after the first surgery, and found two more testicles in his abdomen that she removed!  The pathologist at Marshfield labs, who confirmed the tissue removed at the second surgery was indeed testicles, said she had never heard of a cat having four testicles!  Just our luck.  Oliver finally quit spraying on everything, although he retained a fetish for plastic, and will to this day fill any plastic container he finds with urine (such an enduring trait).  He is very affectionate with clients, and has TONS of personality, so he continues to live at the clinic despite his failings!  He gives us a good understanding of the frustrations clients experience when their pets do not behave as they wish they would!

IN MEMORY OF Rosie- Clinic Cat 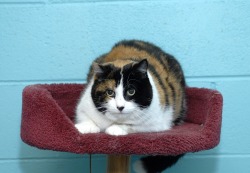 Rosie was our phantom cat, as most clients do not even realize she lives here.  She had a condition called polydactyl (extra toes) on her front feet, and she had pronounced "thumbs" that she uses to grab treats away from Dickens and Oliver when she can get away with it.  Dr. Vicki found her as a tiny kitten, not even able to walk, out back behind the veterinary hospital, after she was crying for 2 days. She was only about 4 weeks old, and this was July of 1999.  Dr. Vicki named her after Rosie Greer, the football player, as she had such big mitts on her due to the extra toes.  Rosie was very affectionate with the staff, and would occasionally come out and see clients and their pets, but any "Rosie sighting" for the clients is usually a big day!  However, towards the end she spent most of her time in the exam room supervising Dr. Vicki and Gary as they examined the pets.  She has a definite weakness for the feline "Greenies", and that is how we get her to come out and play when the office is quiet.  She also loves hunting mosquitoes during the summer season.   We had to say goodbye to Rosie in June of 2016, she has been greatly missed.

IN MEMORY OF Petey 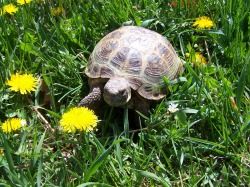 Petey joined the team at Ladyvet Animal Hospital in March 2010.  He was given to us by a client who could no longer care for him. He is a russian tortoise.  Petey spent his days lounging in the sun in the clinic's front room, where the staff at the clinic made him a "home" out of an old planter Dr. Vicki had in storage.  He sure loved his salad everyday and when the weather cooperates, the staff will pick him some dandelion greens and fresh grass.  On occasion, Petey will come out to visit in the reception area.  He was quite shy, but  got used to everyone quickly as long as we have some fresh spring greens in our hands!  We had to say goodbye to Petey in October 2015